At Casa Murguia and Rancho Pitaya

I know it’s been some time since my last newsletter. I’ve been really busy since the end of the year. Mexico is a top destination for digital nomads enjoying regular paychecks and horse riding tours, by nature “al fresco”, are the perfect activity. Rancho Pitaya, with just three guests rooms, all with private entrances, has been nicely busy with travelers looking for lodging beyond the city centers.

Spring has sprung in Oaxaca, and both Casa Murguia and Rancho Pitaya shook off the winter dust after a handful of good rains in the past couple of weeks. Now in late April, the cacti bloom and the birds breed. At the ranch, the massive silver-barked native acacias, Tepeguaje Conzatti are bursting into delicate yellow flower.

Although Casa Murguia was vacant for the three months between the Christmas and Easter holidays when extended Mexican families booked the entire complex, Maria Antonia kept it in tip-top shape. Gratefully, American travelers are staying at the casa now and others are booked to arrive in May. This fall and next winter are already largely booked but there is plenty of availability this summer, and anyone who’s been here knows that Oaxaca’s fresh clear summer weather doesn’t get any better.

“What’s the Buzz? Tell me what’s a happening!”, remember that refrain from Jesus Christ Superstar? Mexico’s self-proclaimed savior, president Andres Manuel Lopez Obrador, is mobilizing vaccinations on such a massive and speedy national level one asks the question, “How long can this last?”. At least until the mid-term elections to local, state and federal legislatures in early June?

At the beginning of April, right here, in little ol’ Rojas de Cuauhtemoc, everyone over 60 who wanted to be vaccinated was. In the remote mountains of Oaxaca’s Sierra Sur, in San Sebastian Coatlan friends confirmed the same.  All my friends over 60 in Oaxaca, Mexico City and other parts of the country have received, at the very least, their first vaccination. Pfizer, AstraZeneca, Sinovac, CanSino and Sputnik are the authorized brands in Mexico.

School teachers, private and public, can be vaccinated now through the end of May with a single dose Chinese variety called CanSino. With just a two-week immunization period, the official talk is that children will be heading back to the classrooms in early June. The question is whether the teachers will also be heading back. Grumbles grow loud over the brand they’re being given.

The big jab, by official accounts, should be available to the 50-59 crowd beginning in early June. I am 59. Patience is a virtue!

Mexico, demographically, has a young population with 66% being between the ages of 15 and 65. Only 8.1% of the country’s population is 65 or older so the federal government will, increasingly, feel the economic squeeze of inoculating incrementally younger age groups.

The City of Oaxaca

With Mexico being one of the few countries welcoming travelers from abroad, and also being the entry point to the U.S. for Europeans, tourism is definitely happening here. Mexicans traveling in their own country are moving pesos around and foreigners entering from abroad are spending within the country. Oaxaca city has been consistently strict in adhering to health protocol for over a year now. The state just went to green light, meaning we can go out and about our business but must still practice precaution and prevention. Oaxacans are so accustomed to face masks, will they become standard usage?

The city is holding up well. Most of the existing restaurants have survived and new ones are constantly opening. Shops are open and the streets, while not thronged with pedestrians are far from deserted. A few days ago, I had lunch at Cathedral restaurant in the historic center with vaccinated friends visiting from Mexico City plus my son Gabriel and his girlfriend Evelia. At the entrance to the restaurant: our temperatures were taken, our bodies were sprayed with a sanitizing mist, we got a squirt of disinfectant gel on our palms and stepped on a sanitizing mat. We were seated at a table 1.5 meters from the next by a waiter with face mask and visor, the table top was sanitized, the cutlery came in sealed cellophane, the menu could be read via QR code or on a recyclable sheet of newsprint. The protocol speaks for itself!

Travelling in the state of Oaxaca

I’ve been traveling considerably within the state of Oaxaca since the new year. In early January, I harvested honey from my bees in the eastern nook of the southern Ocotlan valley at Hacienda Guegorene. This was a unique harvest, representing a short but intense 3-month working season from the bees. When I offered a taste to my apiary master, Pablo Martinez, he declared, ” Do NOT sell this. It’s medicine”. The bees live on 2,500 acres of dry tropical forest boasting a dizzying line-up of biodiversity: cacti, agaves, burseras, acacias, a myriad of wildflowers and other native trees. A pristine stream runs near to the hives.

In mid-February, I made the third trip to Oaxaca’s Pacific coast to visit my friend Luz Lajous in the Comunidad Ecologica at Punta Zicatela in Puerto Escondido. The sea was exceptionally calm and we enjoyed bobbing in the gentle waves morning and evening. I broke up the six hour drive by overnighting in the high Sierra Sur at an intriguing retreat-like place called Refugio: Terraza de la Tierra in San Jose del Pacifico. The rare and enigmatic Arbol de Manita tree in the central patio was flowering and attracted, with a fury, birds like I’d never seen before. From the second-story deck, I plucked a bloom and when I tipped it down to look in,  nectar poured out. The syrup was almost identical in flavor to the 4 -1 ratio of water to sugar Cornell University recommends for hummingbirds. Orioles, tanagers, warblers, Cedar Waxwings and, yes, hummers mobbed this unique tree for its generous bounty.

For the first time in twelve months, I led in mid-March a week-long progressive ride, The Southern Agave and Cypress Trail. I rode my brave lead mare Newest Style; her daughter Niza, veteran gelding Piquin and the youngest horse at the ranch Trail Blazer, now five, completed the equine line-up. In the company of three accomplished women riders,  I headed out of Rancho Pitaya, south down the Valle de Tlacolula and over several passes where we explored the valleys of Ocotlan and Ejutla, to finish 150 kms. and six days later riding alongside the Rio Atoyac in the shade of magical, mammoth Moctezuma Bald Cypress trees. We were received with open arms at the small eco-lodges, all grateful for some business. Smooth earthen farming lanes perfect for long canters, bordered by rolling hills covered in aqua agave plantations and dotted with grazing livestock and their shepherds, epitomized the timeless quality of this world-class ride.

The villages of the Sierra Juarez hurtled themselves into absolute lockdown at the beginning of the pandemic and most, but not all, remain this way. The exceptions made for an exceptional three-day sojourn of birding and ride scouting in the first week of April.  See the Horseback Mexico Calendar for 2022 dates of The Village to Village Ride in the Sierra Juarez.

With Iris Van Driel, birder, rider and, most recently, the designer of the new HorsebackMexico website, I drove north up the 175, and just over the continental divide we stopped at the hamlet of El Cerrizal, at one of its ubiquitous roadside markets. In the midst of buying jam, local plums and peaches, and toasted blue corn tlayudas the elusive but vociferous Brown-backed Solitaire made a rare front stage appearance. Later that day, birding near our comfy eco-tourism cabin in Calpulalpam, the tiny Hairy Woodpecker appeared, it was a lifer for us both. Spectacular Mountain Trogons dashed from tree to tree until be got bored with watching them. Over the course of three days we logged almost 90 species including a landmark sighting of the Pine Siskin, never before observed farther south than the state of Puebla.

On day two we embarked on an early morning road trip east along the ridge to the “rincon”, a dramatic valley system deep within the massive Sierra Juarez range that tops out at 3,100 meters – home to some of the planets most diverse and best preserved confer and oak forests. Villages in the “rincon” descend as low as 1,000 meters above sea level where coffee,  bananas, sugar cane and tropical citrus are cultivated, and this entirely distinct vegetation attracts a distinct lineup of birds. Enigmatic Chestnut-capped Brushfinches, Red-headed Tanagers and a first for me, the rare Chestnut-browed Peppershrike were just a few among many head-turners.

I wanted to return to the village of Tavehua for its artisanal panela – also known a piloncillo. I knew it was in the spring that they pressed the locally grown sugar cane to extract its juice that boils for hours in a humungous caldron until it reaches a syrupy thickness. Only a little calcium carbonate is added to the cane juice before pouring the elixir to cool and harden in handmade clay bowls – pottery being the other local craft. We lucked-out! On the second switchback several men worked at a trapiche along the side of the road. They were feeding the stalks of cane through a press and gestured to us to have a drink. I’d been to this trapiche four years before and it all came back as I walked over to greet, Artemio Montaño, a friendly trim man in his forties. “We don’t have any panela here but we just made a fresh batch so go on up to the house and my mother Leonela will sell you some. Are you sure you wouldn’t like some fresh cane juice?” The boiled and solidified panela is intrinsically more hygienic than the rudimentarily extracted sugarcane juice; I graciously declined. “Remember it’s the house with the bright hanging flowers” he shouted as we got back in the car. Just as I recalled, geraniums spilled down the stone retaining wall on a narrow street perched on an impressively steep slope. It took a bit to find a bow in the street where we could pull off and park. The house full of women, four generations I recon, was strewn with pottery but I was after their panela, pure ambrosia that melts in your mouth like maple syrup fudge. I bought seven kilos of the stuff. Tavehua is so remote, I really hope I’ve bought a year’s supply; I use it in baking and on hot cereal instead of refined or brown sugar. Read this fascinating New York Times article about panela.

Sitting on my porch at Rancho Pitaya, gazing across the great Valley of Tlacolula, I send out on the gentle breeze caressing this April afternoon my best wishes for health and contentment. 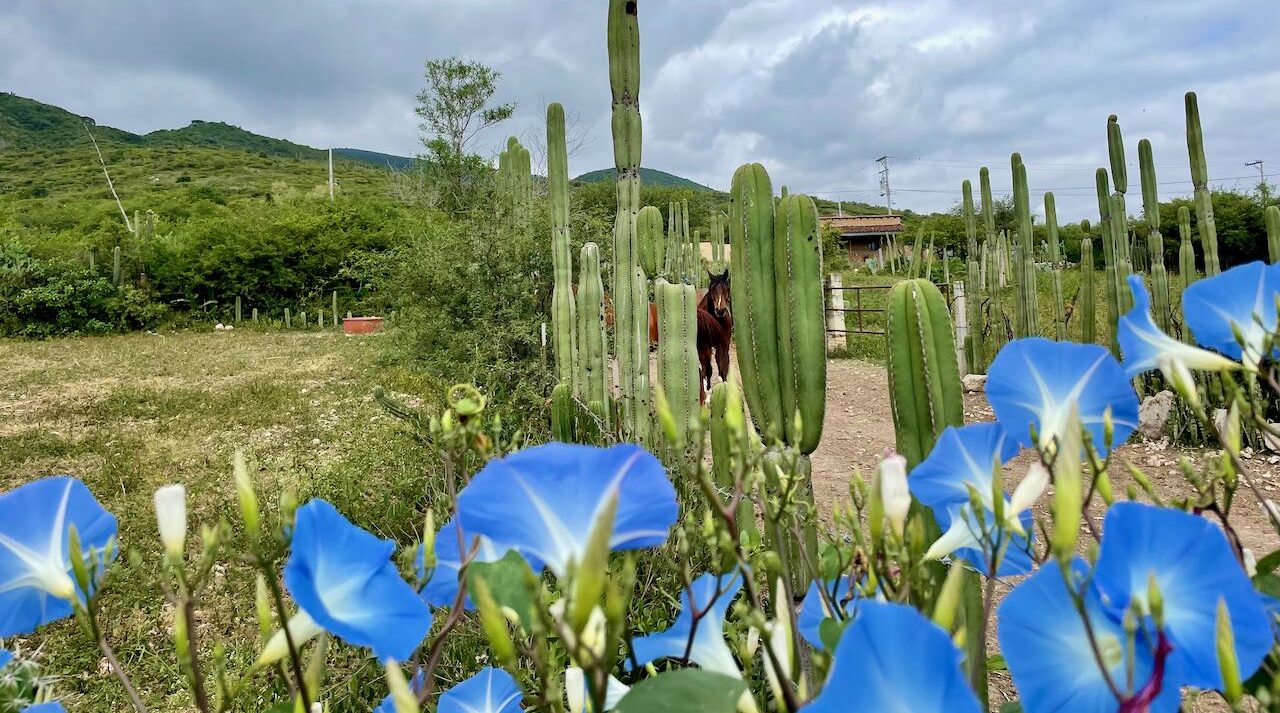 Mary Jane Gagnier Dear friends of Oaxaca,2022 comes to a finale with rejoicing curtain calls. Let’s not leave the best for last but proceed in 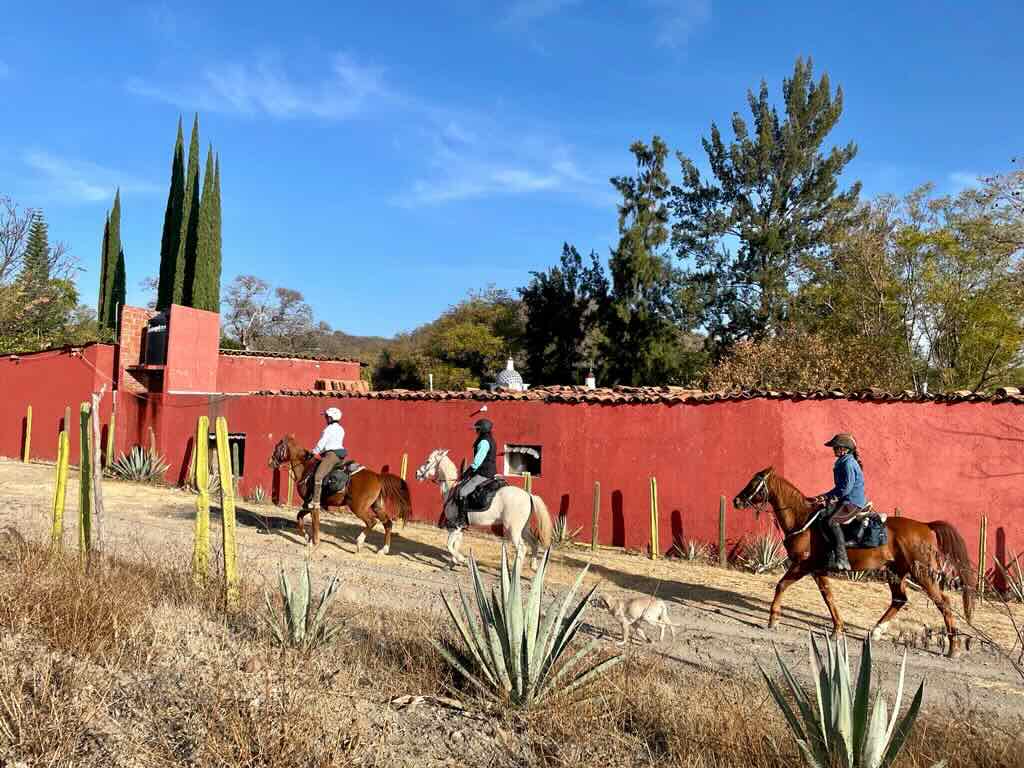 Mary Jane Gagnier The New Year is Hopeful Chosen David Attenborough is my hero He says we must re-wild the earth Yesterday, a woodpecker, a 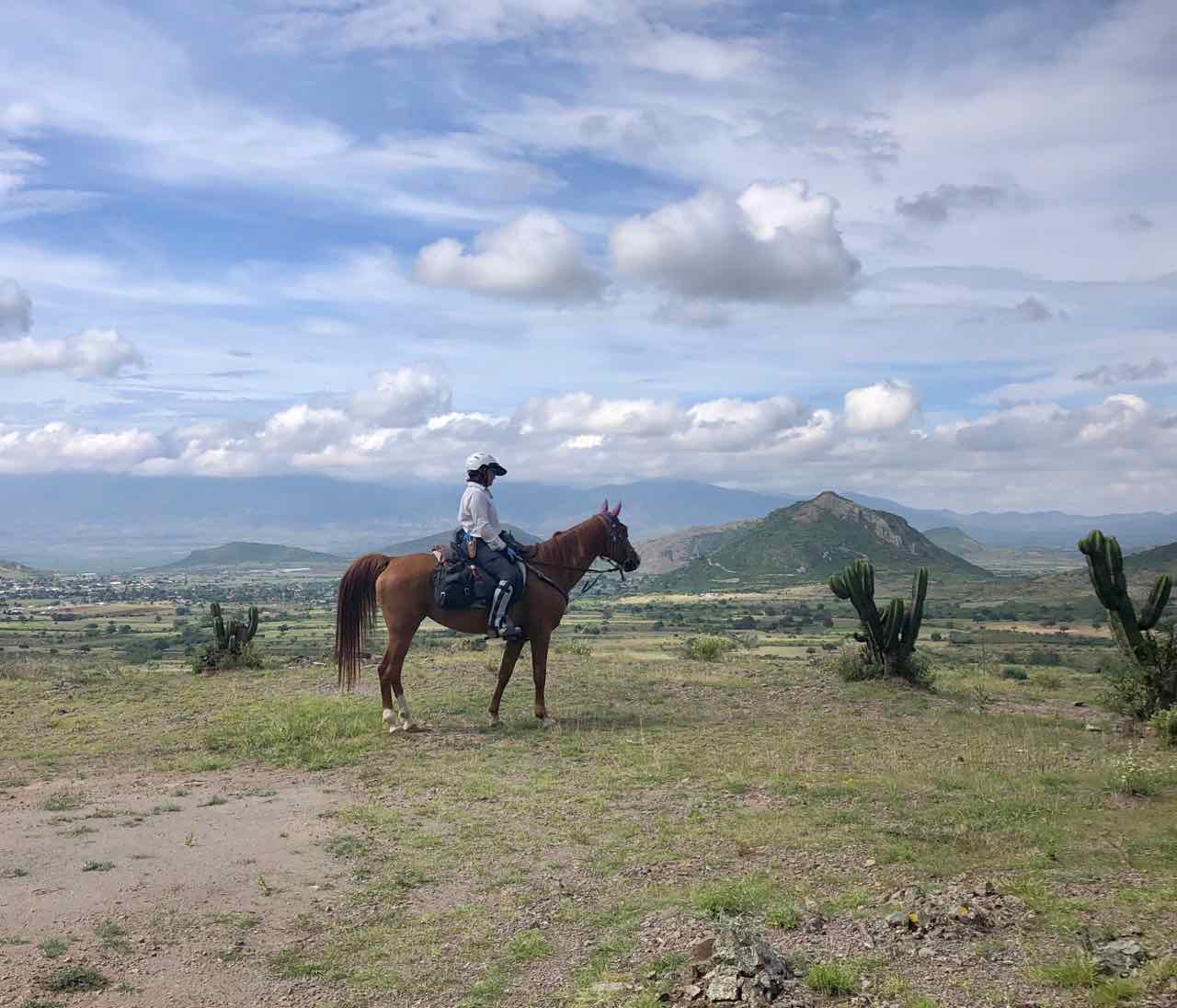 Mary Jane Gagnier Dear friends of Oaxaca, Oaxaca, has returned to green, along with 8 other states in Mexico. The rest of the country is 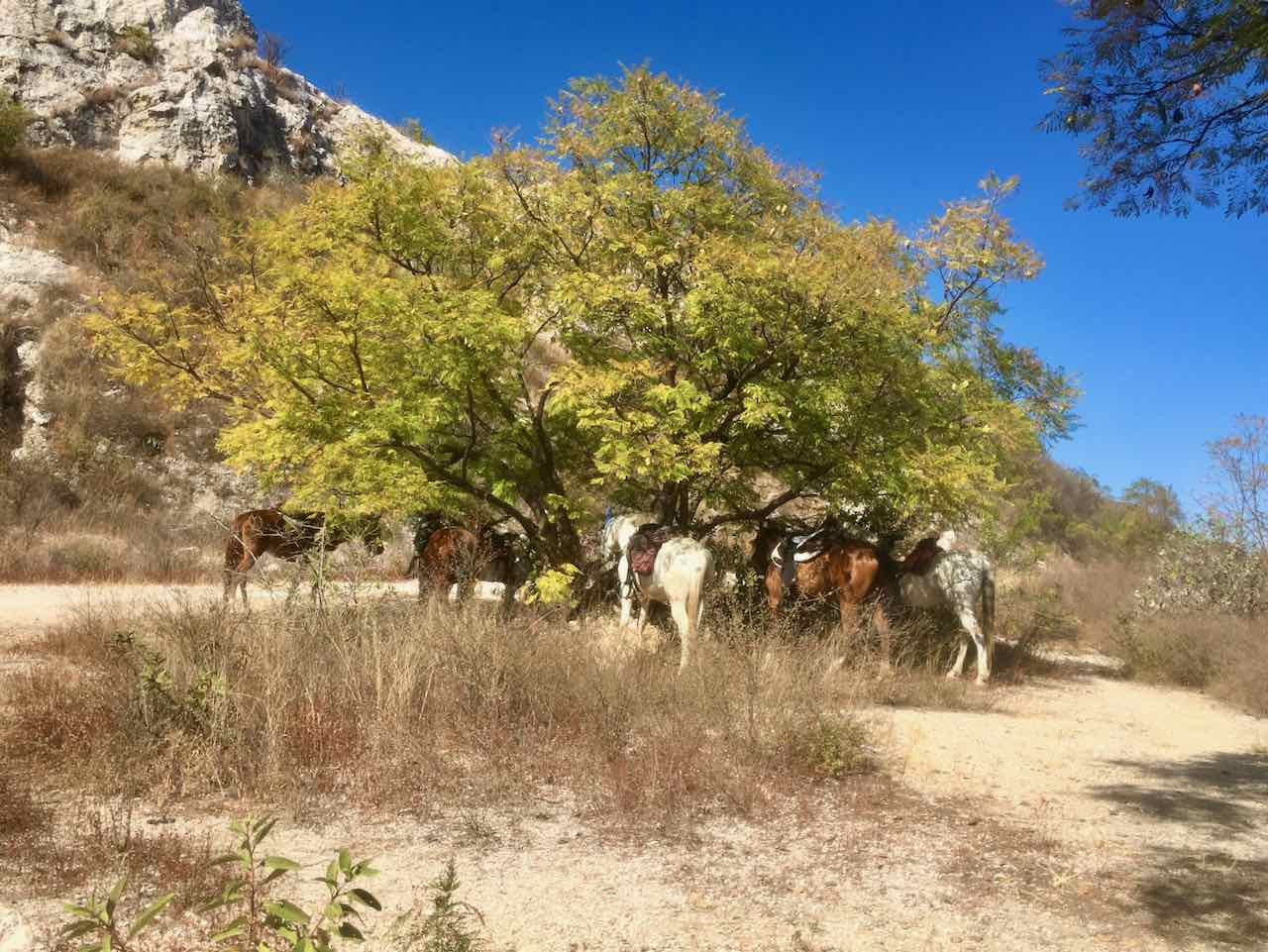 Mary Jane Gagnier I wish everyone fair weather and good footing as we crest the pass to the new year. 2020 has gone by at 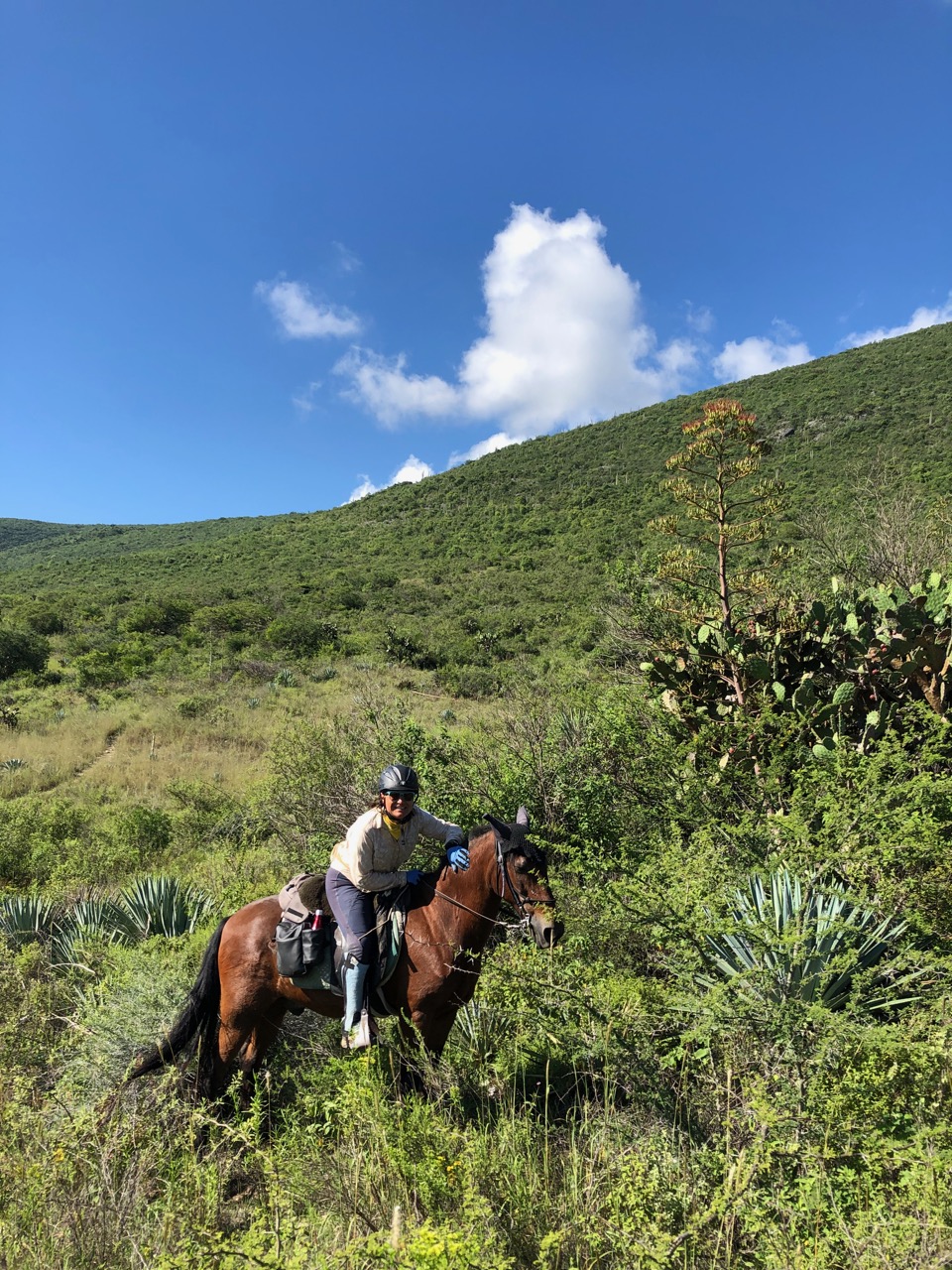